This morning, I ate breakfast with Willie Nelson.

Willie sat to my left, with Nelson across from him. We had just left Kansas City and started making our way across the state of Missouri (which, by the way, is fucking beautiful). Willie is my “seatmate,” and I could not have asked for a kinder or more interesting man to have as a travel companion. He’s a retired General Motors man, been all over the place, lived life to the hilt. He’s 67 years old, but looks younger. Nelson is across the aisle from us, and right between us in age, in his late forties. Somewhere in Kansas I had finally fallen asleep to the sound of these two talking late into the night; it seemed only fitting to start my morning with them, too.

John joins us a little later, after we’ve had coffee and orange juice. He’s interesting, too, in his sixties, with an odd, almost child-like kind of speech and a Kentucky Derby hat. It’s not until after we’ve all received our food (scrambled eggs, bacon, potatoes and a biscuit, all for a decent price) that John informs us he’s a medical veterinarian for horse races, the man in charge of inspections and drug tests. “I test the urine of the horse that wins the Kentucky Derby,” he tells us with pride.

John also changes the conversation a bit. Willie, Nelson and I had covered a wide range of topics, from first jobs to football, but John wants to talk about America. What it is, what it was, how it’s changed, how it hasn’t. I mostly listen, drinking in the stories of these men who have lived so much longer than I. They talk about things you can’t find anymore, like phone booths and cars with vinyl record players and companies with loyalty to their employees. They talk about President Obama, and the race riots of the 60s, and the fact that you can’t make fun of the queen of England in Canadian media. They talk about the greatness of America and the failings of the generation that has inherited it.

I’m part of the conversation, chiming in with the occasional story, the requisite reactions to jokes or historical anecdotes. Willie, in particular, goes out of his way to include me. At the same time, though, I often feel like an observer, someone who is not unwelcome, but who should probably just shut up, listen and learn. It’s not just because I’m the youngest, or because I’m the only white man at the table. It’s because in the end, compared to these three, I know shit about shit. Far from making me feel inadequate, the realization of how much I can learn here is almost comforting.

The four of us finish our breakfast and talk until they kick us out of the dining car. Then we talk some more.

From left to right: Nelson, John and Willie. 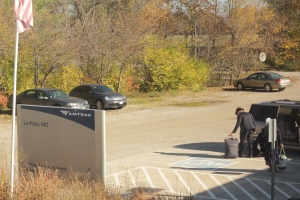