Some Amtrak trains have WiFi, but apparently not this one. Mixed blessing, really; no temptation to waste time online, but a pain in the ass when I need the internet for something, like blogging. So far my phone has saved me in that regard…when it can get anything resembling a signal.

Anyway, we’ve passed through Raton, out of New Mexico and into Colorado. I’ve been passing the time by talking to people on the train, to varying degrees. There are a number of kids — people in their late teens/early twenties — sitting behind me, mostly bitching. The train is too slow and the food isn’t up to their standards, and of course, there’s no WiFi. It’s funny, I was just talking to an older couple in the lounge car about how the leisurely pace of the train, as opposed to a plane, breaks down barriers between people and forces us to be human with one another. I think I was the one who said that it seems people my age are always in too much of a hurry.

The couple I mentioned are from the central valley in California, heading to Kansas with their two grandsons. I’m not sure what I was expecting when I asked where they were from, but it wasn’t California; their style of hair and dress made me think more along the lines of Salt Lake City in the 1800s. They are wonderful people, though, easy to talk to, devoted to train travel. The boys are both young, but apparently are already on their second train ride; David and Susan have done this countless times. They are taking a plane back, however. Once the visit is over, so is the vacation, and it’s time to go home.

The man sitting next to me is going to Michigan. We talked for some time when he first boarded, then lapsed into a not-uncomfortable silence for a while. He’s an older black man who pulls his hat over his eyes when he sleeps like a detective in an old film noir, and he’s reading a book called “Know Your Bible.” I will have to chat with him more later.

There’s also a fascinating member of the Amtrak staff named Tim, who delivered a brief history lecture in the lounge car earlier when we passed by a place in New Mexico that was the site of a Civil War ambush. As we passed by we saw the soldiers’ legacy: a bridge built by the Confederate Army in 1862, still standing (barely), and a sign that reads “The Killing Fields.” Tim says this lesson is not part of his job or anything. He learned it from a traveling history professor and decided to pass it on to us. Later, Tim sang over the intercom to celebrate a passenger’s 80th birthday.

These are the sort of people who don’t travel by plane, and if they did, you wouldn’t have time to find them. As David says, we break down barriers here, forcing ourselves to communicate in age-old fashion as we travel in darkness through Colorado. 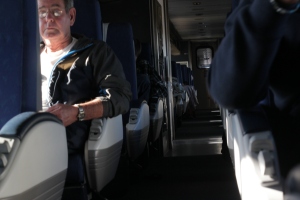 Strangers on a train.